We've Come This Far by Faith 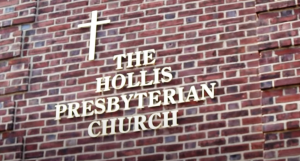 In the Fall of 1921, the Rev. Dr. Frederick Todd Steele, serving as a Sabbath School Missionary for the Presbytery of Brooklyn-Nassau, petitioned the Jamaica Reformed Church for permission to use their Union Chapel located on Jamaica Avenue near 189th Street to hold Sunday School meetings. On January 15, 1922, five adults and two children attended the first service.  By Easter 60 people were in the congregation. On November 2, 1922, the Hollis Presbyterian Church was organized with 87 members.  Rev. Steele was installed as the first pastor in January 1923. Land at 104th Avenue and 196th Street was purchased for $11,000 and paid for in 14 months.  The cornerstone of our current building was laid in October, 1926 and the first service was held on Easter Sunday in 1927.  Dr. Steele resigned in 1929 leaving the church with 451 members and a Sunday School of 400 pupils.

A young Rev. Lorne Brown and his wife came from Stamford CT and was installed as the second pastor on December 11, 1929.  The congregation grew to 880 under his leadership. He led the development of a strong youth ministry.  Rev. Brown developed cancer and died in 1936 at the age of 39.

From 1937 to 1952, Rev. John Mitchell Currie served as the third Pastor of Hollis.   Membership prior to WWII grew to 1124.  While serving as Pastor, Rev. Currie, met and married the organist and Choir Director Edna Lemon Currie.  During this time the Rev. Winifred Moody and his wife, who were retired missionaries, were serving as the Director of Christian Education.

When Rev. Currie resigned in 1952, Rev. Moody continued to serve as Director of CE and also served as Acting Pastor and Moderator of Session.

In 1953 Rev. Wallace W. Gibbs was called to be the 4th Pastor of Hollis.  Given the size of the congregation Rev. Gibbs 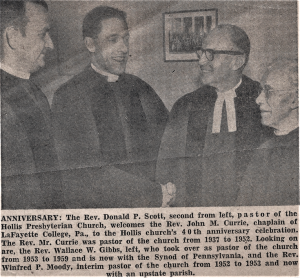 requested Session to retain the services of an Assistant Pastor. Rev. Charles Dougherty served in that role from 1954-1957. It was during this time that the first African American families joined the church. Rev. Dougherty’s work with the youth was energetic and made the Youth Group a lot of fun by leading retreats in the winter, summer and fall.  When Rev. Doughterty left in 1957, the church called a 25 year old Rev. Donald P. Scott  (Scotty) to be Assistant pastor.

When Rev. Gibbs resigned to take a call from a church in Arizona in 1959, the church called Rev. Scott as its 5th Pastor.  Rev. Charles H. Nelson III, better known as Chuck ,  served as  our Assistant Pastor  from 1960 to 1966.  These two dynamic young pastors went out into the community to personally invite new African American families to join the church and the congregation changed peacefully from majority Caucasian to African American.  In February 1964, both Revs. Scott and Nelson joined eight other clergy in traveling to Hattiesburg MS to participate in the voter registration drive. They were arrested and  bailed out by the national Presbyterian Church.  From 1966 to 1969, Rev. Roger Quillan served as Assistant Pastor and is fondly remembered for his Adult Bible Study classes.  Both  Revs. Scott and Quillan were passionate in their opposition to the Viet Nam War.  During his pastorate, Rev. Scott met and married his wife Joyce who had grown up in the church. Rev. Scott resigned as Pastor in 1972 but continued to serve as Interim Pastor until 1973. 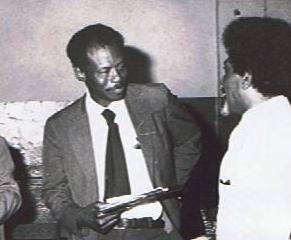 In August of 1973, Rev. Jefferson P. Rogers was called as the first African American and 6th pastor of Hollis.   During his pastorate he created the Forum series and invited noted civil rights leaders Ralph Abernathy, Julian Bond, and Benjamin Mays to speak at the church.  He resigned his call in March of 1977 and the church was put under the care of an administrative commission of the NYC Presbytery.  The Rev. Dr. Bryant George was named as moderator of Session and Rev. Edler Hawkins served as Interim Pastor until his death in December.   The Session of the church was reinstated in September, and the newly elected officers were installed in November of that year.

December 1978 saw the installation of the then 27 year old Rev. Michael E. Livingston as the 7th pastor of Hollis. He and his wife Nancy and their young son Aaron arrived from CA.  The Capital Improvement and Reserve Fund was established during his pastorate.  Michael was called to serve as the Director of Admissions at Princeton Seminary in April of 1985 and currently serves as the Executive Pastor of the Riverside Church in Manhattan.  Rev. Howard Bryant served as interim pastor from.  June, 1985 to February, 1987.

In October ,1987 Rev. John F. Warner was called to be the 8th Pastor of Hollis.   Under his leadership, the church in conjunction with the Coalition for the Homeless, instituted a weekend homeless shelter program. In December of 1992 Rev. Warner left Hollis to accept a call to serve in Chicago.  While the church was without a pastor, a new organ was purchased and plans were made to make improvements to the church building to render it handicap accessible. 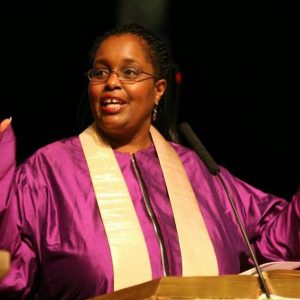 On November 26, 1995, Rev Robina Winbush was installed as the first woman and 9th Pastor of Hollis.  A three-tier ramp was completed in the spring of 1996 at a cost of $130,000, and the church library was re-established.  The church celebrated its 75th Anniversary year in 1997.   Programs for youth initiated at that time include the Lucy Craft Laney Academic Enhancement Center, Hollis Scholars, The Spirit of Dance and Voices of Praise  gospel choir  began to enrich our worship experience.  Rev. Winbush left Hollis in January 2001 to serve as the Associate Stated Clerk for Ecumenical and Agency Relations for PCUSA  based in Louisville, KY. God called her home  in 2018 while returning from Israel.

Rev. Dr. Mark L. Chapman served as Interim Pastor from 2001- 2002.  On September 15, 2002, the Rev. Dorothy Carrington Benjamin was installed as the tenth pastor of the Hollis Presbyterian Church.

In an effort to increase our social ministry, Rev. Benjamin fostered relationships with local community leaders that resulted in financial support for the church.  This support has enabled us to continue existing youth programs and the Summer Day Camp, and institute new intergenerational programs.  In November of 2006, members of the Voices of Praise Gospel Choir joined other choir members from Presbyterian churches in Southeast Queens in a concert tour of Ghana.  Due to illness, Rev. Benjamin resigned her pastorate of the Hollis Presbyterian Church in September, 2006 and joined the church triumphant in December of that year. 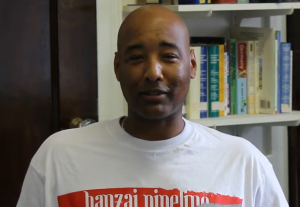 In November of 2007, the Rev. Dr. Mark L. Chapman was installed as the 11th pastor of Hollis.   The institution of the Basketball Academy and, more recently, the Food Pantry have increased the outreach to the community. Under his leadership major capital improvement s were made to the building.  Despite his additional duties as a Professor of African American Studies at Fordham University and prison ministry, Rev. Chapman gave devoted service to Hollis, first as Full time Pastor and then, in order to provide financial relief to the church, as Temporary Supply Pastor. He served in this capacity through June 30, 2017.   His knowledge of and passion for the Holy Scriptures is without equal.  The church celebrated the pastorate and gave thanks to God for him and his ministry on September 24, 2017.

In September of 2016, the Session retained the services of  Rev. Carol Dougherty-Steptoe as a Church Development Consultant.

A daughter of HPC who served as an Elder in her youth, Rev. Carol has provided invaluable service to the church during this interim period.

She brought with her a renewed energy, and improved engagement with parishioners, new visitors, as well as with our local Sister churches. As a partner in the Southeast Queens Presbyterian Church Collaborative, Rev. Steptoe currently helps us to share the Word via Virtual Worship Services, while Health Safety protocols have kept our doors closed. Together with the Elders, Deacons, and members of our Congregation, she is is helping us to chart a course to brighter days.

Through successive generations, and historic upheavals, Hollis Presbyterian Church has remained a beacon of hope, place of Sanctuary, and an agent of positive change in our community. We have been favored with inspired Pastoral and Lay leadership, faithful worshipers, and the matchless love of Jesus Christ.

May God continue to Bless us in the years to come.